EASE INTO PREP WITH AN ACT® QUESTION A DAY

Build prep into your routine until it's second nature.
Get an ACT question—with detailed answer explanations—in your inbox every day.

When water droplets containing dissolved ions freeze, opposite charges may develop between the newly formed ice crystals and the still unfrozen droplets. As the ice crystals and droplets separate in a cloud, charged regions form.

Solutions of four sodium (Na) salts, containing fluoride (F-), chloride (Cl-), bromide (Br-), and iodide (I-) ions, were each made at six different concentrations, in moles per liter (moles/L). The solutions were slowly cooled until freezing began. The electrical potential (whether the droplets had a positive or negative charge with respect to the ice crystals) was measured in volts. The results are shown in the Figure. 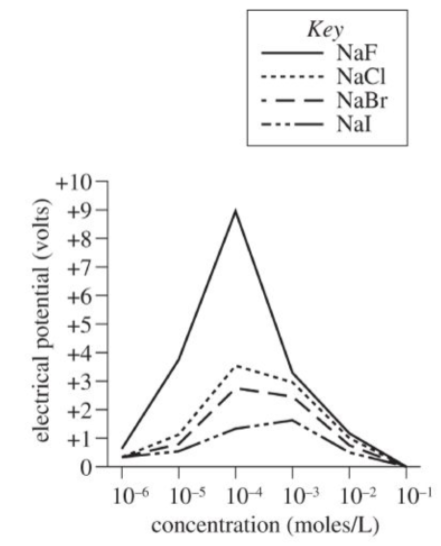 The correct answer is (A).

Getting to the Answer: The experiment measured the electrical potential (the charge with respect to ice crystals) for solutions each containing either F-, Cl-, Br-, or I- at different concentrations. To determine which ion produced the greatest electrical potential, other variables need to be held constant. Evaluate each answer choice to determine which setup varies only the ion type.

(A) Correct: the effect of ion type on electrical potential could be determined if the other independent variable in the Experiment, ion concentration, was held constant

(D) Incorrect: The Experiment did not study collision rates; if the collision rates were different instead of constant, the effect of ion type on electrical potential could not be determined

Spacing out study makes it stick. Get practice questions emailed to you every day.

READY FOR A HIGHER SCORE ON THE ACT?

No matter where you are on your journey, Kaplan's expert teachers can help you raise your score.
Find the course that fits you best.